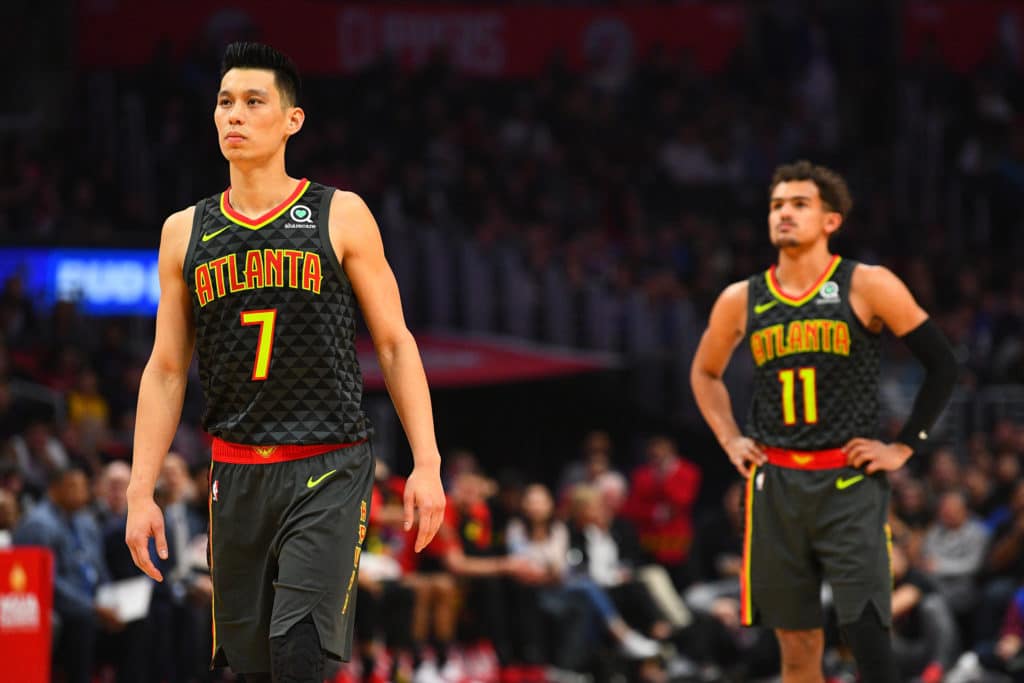 If Hawks deal Lin, he accomplished exactly what the team...

Jeremy Lin had one job when he joined the Atlanta Hawks — help Trae Young become a pro — and Lin has done that well so far this season.

For several games this season, Trae Young has worn Active Faith Sports bracelets etched with the phrase “In Jesus Name I Play” around his wrist. The bracelets were given to Young by Jeremy Lin.

Hawks general manager Travis Schlenk traded for Lin during the offseason to help mentor Young on and off the court and help the rookie’s transition into the NBA. With the mental and physical strains the game takes on the body, Young has found comfort in having Lin as someone who he can learn from on and off the court.

“He’s big into his faith like I am, so it’s good to have someone like him around,” Young said.

Lin has been a calming influence for Young, especially in the beginning of the season when the latter struggled with poor shooting and careless turnovers. So Young watched and learned from Lin as he, too, started poorly after coming back from two major injuries that cost him essentially two years of basketball.

Patience and poise were the two words Young used to describe what he has taken from Lin. Lin went from being virtually unplayable in the first few weeks of the season to stepping up in November when he shot 56 percent from the field, 48 percent from 3-point range and 84 percent from the free-throw line. But Lin always would tell Young early in the season that he could not worry about what he had done in the previous game because the next one could be disastrous. That thinking has stuck with Young throughout his rookie season, which has featured numerous games when he looks like a future star at point guard to being someone who looks no better than a backup.

Young said during most games at halftime and right after the game ends, the two of them talk and go over how they can improve for the next play.

“Honestly, he’s a big reason why I feel like I’ve been able to progress at the level I’m at right now,” Young said.

Young entered the league thinking he was masterful in the pick-and-roll until he met Lin. Lin has helped Young improve on creating entry passes into the bigs at the elbow and how to properly space when the Hawks are running dribble-handoffs into pick-and-rolls. The lessons Young has received in pick-and-roll from watching Lin have helped turn John Collins into one of the most effective players in the league in pick-and-roll situations.

“It’s been really fun to see his progress,” Lin said of Young. “I feel like he’s obviously grown on the court, which everyone can see. I also think that he’s done a lot of growing internally and within himself. He’s been able to do a lot of things in terms of just skill level, being so much better than everyone else and now he’s had to deal with NBA length. He’s changed a lot now as far as controlling the game and managing the game. He’s done a great job with that.”

The reality of the Young and Lin relationship, however, is that it may possibly be nearing its end with the trade deadline approaching Feb. 7. Lin is a prime candidate to be dealt before the deadline as he’s on an expiring contract, isn’t part of the Hawks’ future plans and is valuable to teams that are looking to make a playoff push and need a veteran point guard.

Lin said he isn’t worried about what may or may happen by the deadline. He doesn’t get caught up in the rumors or what’s being said about him because he knows it’s one thing that is uncontrollable.

“Honestly, it’s not that much of a challenge because there are so many ‘What ifs?’ ” Lin said. “There’s some stat out there like 90 percent of people’s worries don’t even come true. I don’t want to be someone who is just worried every day and think about, ‘What if? What if? What if?’

“A lot of it goes back to my faith. That’s why it’s really not that hard for me. I trust that no matter what happens that God does have a perfect plan for me. I’ve been waived twice before. I’ve been sent to the D-League four times. I had to sign contracts overseas, and luckily I didn’t have to go because of the lockout. I’ve been through so much worse than being traded, so it’s really not hard.”

Relying on his faith is what Lin had to do earlier in the season when it was clear that the veteran was playing better than the rookie. Head coach Lloyd Pierce didn’t make a lineup change when Young had his early season struggles and instead kept him in the starting lineup even with Lin having an unbelievable month of November. There have been points when it has been tough for Lin to accept a bench role because, he says, everyone wants to be a starter and get the majority of the minutes. He also was sent to Atlanta from Brooklyn where he was the starting point guard and managing the Nets on offense.

“At the end of the day, you have to realize that basketball is a team sport,” Lin said. “What that really means is you have to sacrifice sometimes.

“There will be times where I think to myself, ‘Man, I would love to have a big role.’ But then are times where I just go back to thinking that I was hurt for two years, and I find a deep appreciation for the game.”

Even when he was the starter in Brooklyn, Lin was in a similar situation that he’s now in with Atlanta. He was the veteran who found himself on a team that is in the middle of a rebuild. It’s an unsettling position to be in because there’s an understanding from the players that their long-term future is likely not with the organization that is currently paying their salary.

And that’s where Lin is now as the trade deadline approaches. Lin has done exactly what he was asked to do from the moment Schlenk made the trade with Brooklyn. Lin helped the future foundational piece find his place in the league, and for that, it’s possible Lin will be rewarded with a chance to compete in the playoffs.

“I love Jeremy as a teammate, and he’s been a big help for me since I’ve been here,” Young said. “If he’s here, I know he’s still going to help me. If he’s not, I know we will always stay in touch.”

And-1sThe All-Star Game reserves will be announced Thursday, and it’s not very likely the Hawks will have a representative on the Eastern Conference roster. Collins is the best bet for Atlanta, but the belief is he will not see his name called when the team is finalized. He missed the team’s first 15 games of the season with an ankle injury, and that may ultimately what costs him a spot on the team. Before the Hawks’ game against Sacramento on Tuesday night, he told The Athletic why he feels like he deserves a spot in the game: “The biggest reason, I feel like, is my consistent play. There may be some guys with better numbers or better records, but I think my consistent play, my efficiency and my ability to do what I do night in and night out, especially at my age, should put me in fair competition with a lot of other guys for an All-Star spot. I feel like I am pretty deserving. I know it’s going to be a tough debate, and I know I have an uphill battle, but I definitely think I should be one of the reserves.”Collins is averaging just less than 20 points per game and 10 rebounds for the season while shooting nearly 60 percent from the floor, 40 percent from 3 and almost 75 percent from the free-throw line. How many players have put up numbers like that for an entire season in the history of the league? Zero. No player has averaged those numbers for a season, which was first mentioned by SB Nation’s Jeff Siegel. It’s not crazy to think that Collins could finish the season with one of the most efficient seasons seen in the league’s history. “It’s insane to think about it,” he said. “Not to toot my own horn or anything like that, but you would think that I would get more national attention. I am putting up a historic, never-been-done before stat line. I feel like a reason why I can’t be an All-Star this year is just because of the lack of attention, but it’s crazy to think about how I am doing this at such a young age. It always makes me laugh about my future.”The biggest area of growth from Collins this season is his 3-point production. He only took 47 3s last season. He’s already surpassed 80 in fewer than 35 games. He doesn’t attribute his efficiency from 3 to one specific thing other than repetition. This is the first year where he has been encouraged to shoot from beyond the perimeter because of what Pierce wants in this offense. “I feel like I can shoot it now. I’m not taking as many as other guys, obviously, but I feel like I’ve proven that I can make them on a consistent basis. I’m shooting 40 percent right now, and it’s early, but I think that proves that I am a threat when I am on the perimeter.”The biggest drop in production for Collins has been his lack of blocks and steals. For someone who has played as many minutes as he has, he surprisingly has fewer than 25 combined blocks and steals this year. Collins said he feels like his production in both categories has slipped this season because he has played more perimeter defense than he has ever played before. He said he’s still learning the techniques on how to guard on the perimeter and he believes his ability to defend will get better with more experience and time.